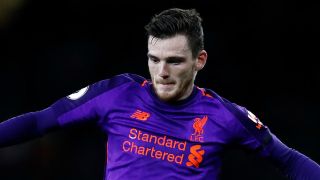 The visitors led thanks to James Milner's strike just after the hour, his 50th Premier League goal, but they were pegged back at Emirates Stadium on Saturday by Alexandre Lacazette's late leveller.

Jurgen Klopp's men moved top of the table despite that setback, although last season's runaway champions Manchester City will leapfrog them if they avoid defeat at home to Southampton on Sunday.

And Robertson accepts it was frustrating for the Reds to leave Arsenal without what would have been a third consecutive win in the Premier League.

"If you look at last season, especially away from home against the so-called top six teams, we didn't do well enough," Robertson told Liverpool's website.

"The only point we picked up was here [at Arsenal], 3-3, so we've kind of rectified that a bit in the games that we've played.

"We are unbeaten against the top six so it's positive but we could have quite easily won. Hopefully at the end of the season it will be a point gained – but just now it doesn't feel like that.

"It was a hard one because we took the lead and this season we've been really good at holding on to leads. I thought that was going to be the case.

"We lost a poor goal from our point of view. If you look back on the game they probably had more possession but the clear-cut chances have all fallen to us.

"On another day we could have been a bit more comfortable, but two good teams went at it and a draw is probably a fair result."

Robertson said a tactical change by Klopp at the interval enabled Liverpool to regain more control but accepted Arsenal piled on the pressure in the closing stages, culminating in Lacazette beating Alisson to earn the Gunners a draw.

"We came under a bit of pressure and in the first half we probably didn't get it quite right – they switched the play and were really good at overloading on both sides," he added.

"It was tough and we changed the formation a bit at half-time and that helped us; obviously Millie helping Trent [Alexander-Arnold] out and Sadio [Mane] did a great job for me. It made it a bit more even and then it meant we could get forward a bit more as well.

"It was a good game but defensively we did come under a bit of pressure, especially in the last 10 minutes when they equalised, but we managed to stay strong."