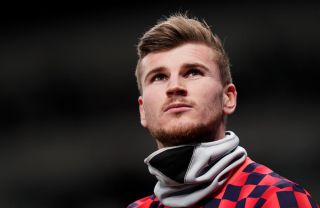 Werner is one of the most in-form strikers in Europe at the moment and is helping RB Leipzig to their best season on record.

Leipzig find themselves second in the Bundesliga and ahead going into the second leg of their Champions League round of 16 tie with Tottenham Hotspur.

Their fine campaign is no small part down to the exploits of Werner, who scored the penalty in their 1-0 first-leg win against Spurs.

The German goalscorer has netted 27 times so far this season in eye-catching fashion and has become the talk of the transfer market.

Having been linked with Bayern Munich last summer, Werner is now attracting interest from the Premier League leaders Liverpool.

A move for Werner could be cheaper than first thought, however, with his release clause being worth an initial £25m, according to Sport 1.

The German outlet claims that the upfront fee is attached to a string of bonuses that may see the overall figure rise over time.

The Reds are reportedly weighing up a deal for the 23-year-old, who himself has been full of praise for the Champions League holders.

"Liverpool are the best team in the world at the moment," Werner told Viasport.

"It makes me very proud to be associated with it. It's great, but I know that Liverpool have a lot of good players and I have to improve."

Jurgen Klopp, who saw his team come back from behind to beat West Ham 3-2 on Monday night, commented on Liverpool's transfer plans at his press conference.

"On the one hand, it is easier to convince players if they consider your club to be the best in the world," he told the media.

"On the other hand, the better your team is, the more difficult it is then they ask questions like 'when and where would I play?'