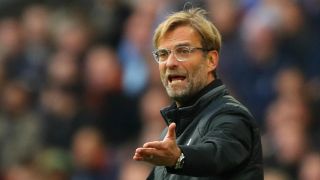 Jurgen Klopp says Liverpool deserve to be ninth in the Premier League after their poor start to the season continued with a thrashing at the hands of Tottenham.

The Reds suffered a damaging 4-1 loss at Wembley on Sunday, with Harry Kane scoring a double as Liverpool's defence and goalkeeper Simon Mignolet endured an afternoon to forget.

Klopp substituted centre-half Dejan Lovren with only half an hour gone in a defeat that left them 12 points adrift of leaders Manchester City and behind sides like Watford, Newcastle United and Burnley in the table.

Liverpool have leaked 16 goals in nine games – their worst top-flight defensive record at this stage of a season since 1964-65 and Klopp was frank about what his side deserved from the early months of the campaign.

"We don't have to talk about top four," he said at his post-match media conference.

"We are where we are, we deserve that. If Tottenham needed to be geniuses to come through us then there is no debate.

"But when you make the mistakes we did we have to work on that, it was too easy for Tottenham, much too easy.

“You cannot get results with a performance like this against Tottenham. I don't want to say anything positive about us. Whatever you say today about us in a negative [light] is right, we were wrong."

Klopp had been critical of Lovren in his initial post-match interview – saying even he could have done a better job in stopping Kane for Spurs' second goal - but was keen not to single out the Croatian any further.

"Dejan was no worse than anyone else. We had to change something, make things more stable.

"I have not spoken to him yet. I could've taken another one off and it wouldn't have made a difference, we still conceded two goals."