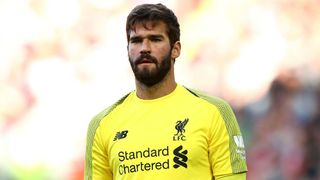 Liverpool goalkeeper Alisson has vowed to continue dribbling out from the back, despite giving Reds fans a couple of nervy moments in the win over Brighton and Hove Albion.

Jurgen Klopp had hoped to eliminate the errors which blighted previous number one Loris Karius last year when Liverpool paid a then world-record fee for a goalkeeper to sign Alisson from Roma last month.

The Reds are yet to concede a goal in the three Premier League games Alisson has started and he showcased his ability with the ball at his feet by dinking over Brighton's Anthony Knockaert on Saturday.

However, the Brazilian was almost caught out by Glenn Murray on two occasions and Alisson admits it is an approach that carries an added element of risk.

"I try my best to help the team in the build up," Alisson told reporters.

"If sometimes there is a situation where there is dribbling, I do it carefully.

"It could be too risky, but it's part of the game, we are a team that plays from the back with the ball on the ground.

"That's part of the team's characteristics. Mistakes may happen, but we work hard during the week to [do] everything correctly during the matches."

Defensive fragilities seemed to haunt Liverpool in the past but centre-back Virgil van Dijk and Alisson appear to have solidified a team that has taken a maximum nine points in the Premier League.

"Hopefully I will keep helping the team, it is teamwork," Alisson added.

"I have my contribution, but I am not the main responsibility for the clean sheets.

"If we do not concede we will be close to winning because our attack is really good. I'm very comfortable at the club in a great environment, with everybody pushing in the same direction to win.

"We've shown what we are capable of and hopefully we can keep on track. The Premier League is very tough and competitive."