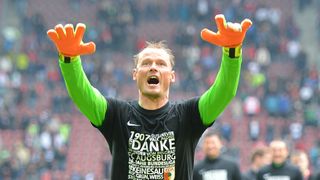 Liverpool goalkeeper Alex Manninger will retire once his contract expires at the end of June.

The 39-year-old moved to Anfield at the start of the season as third-choice goalkeeper behind Simon Mignolet and Loris Karius, but did not make an appearance and will call time on his professional career next month.

"I thought about it a couple of months ago and I was keen to decide myself, not wait again for the summer and whether I receive a phone call or not," Manninger, who won 33 caps for Austria, told the club's official website.

"I tried to listen to myself, to my body, and then I said 'no, that is enough'.

"I did not want to go too far and let my body decide, or the phone decide if it does not ring, so that is why I came to the decision of that being it for me.

"I feel good, I finished at a high level I never dreamed of. If I played for big clubs at my peak, that is one thing, but to have had this experience now with the staff, coaches and players of Liverpool is fantastic. I have had one of the greatest experiences in my career here, but it is time."

Alex Manninger has confirmed he is to retire at the end of his contract.Interview: May 25, 2017

Manninger's career, which spanned more than 20 years, included spells with Arsenal and Juventus, earning him Premier League and Serie A winner's medals.