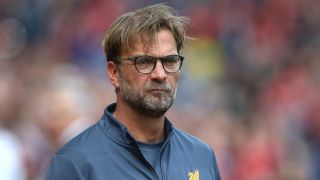 Jurgen Klopp acknowledged Liverpool "need to be in the Champions League" after Sunday's 3-0 win over Middlesbrough sealed a top-four Premier League finish.

The Reds endured a nervy 45 minutes at Anfield, during which Arsenal took the lead over Everton to drop the Merseysiders down to fifth, before Georginio Wijnaldum broke the deadlock in first-half stoppage time.

"It is a long season and when our timing got better we were unbelievably dangerous," he told Sky Sports after Liverpool booked a spot in the qualification play-off round for Europe's elite club competition.

"I am really happy about this. I think people deserve this opportunity for us to be able to qualify for the Champions League."

Speaking about the battle with the Gunners, whose win over Everton was not enough, Klopp insisted he only became aware of their score at the break.

The German added: "I asked for the results at half-time and not before, so I had no idea about the Arsenal score. You have no influence and again the boys delivered.

"We are Liverpool. We have to deliver. We did it again. We have to improve and we will but for now, it is a big relief.

"A club like Liverpool need to be in the Champions League. Other clubs have the same target so it is not easy to be there consistently.

"I am proud of the boys, we worked a lot and everything is good. Now we have to build on it."

Boro caretaker boss Steve Agnew saw penalty shouts waved away for his side when the scores were still level, with Patrick Bamford having gone down under a challenge from Dejan Lovren.

He reflected on that key moment and a generally poor campaign for the club, with a decision to be made by chairman Steve Gibson on who will lead them next season following an immediate return to the Championship.

"Liverpool have some top-class players and you wait for moments like that Patrick Bamford penalty shout and that did not go our way," said Agnew.

"It has been a difficult season and the bottom line is that we have not scored enough goals or won enough games. We need to use this summer to reflect and work out what we need to do to come back.

"The chairman is the best in my opinion and I'm sure that talks will be progressing over the next few weeks about the future of the club."