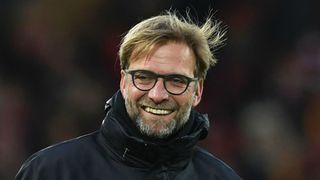 Jurgen Klopp insists Liverpool have nothing to celebrate yet after battering Watford 6-1 to go top of the Premier League on Sunday.

The Reds were at their devastating best at Anfield with their hugely impressive front three of Sadio Mane (2), Philippe Coutinho and Roberto Firmino all deservedly on the scoresheet as Chelsea, who beat Everton 5-0 on Saturday, were displaced at the summit.

Emre Can and substitute Georginio Wijnaldum were also on target as Liverpool sent a huge statement of intent to their title rivals, but manager Klopp says his players have a "responsibility" to play well and warned the hard work is only just beginning.

"When the result gives you the impression that it is easy there is a lot of hard work behind that. The result is wonderful and the performance is terrific," he told BBC Sport.

"But Chelsea were not bad, Manchester City against Barcelona not bad, Arsenal have great movement and Tottenham - oh my god. We need to be good.

"Good results and performances help confidence, we will send the players all around the world and hopefully they come back healthy for a big challenge of Southampton.

"There is nothing to celebrate at the moment, this is our responsibility to play well when you put on the red of Liverpool, it is all good until now."

Coutinho was awarded the man-of-the-match award for another superb display, but Klopp was keen to credit the all-round contribution of his team, with Wijnaldum and Daniel Sturridge both impressing off the bench.

He added to Sky Sports: "In specific moments I enjoyed the performance. At others it was difficult.

"It was a brilliant performance for 84 minutes, but for the last six minutes it was not too nice, not just because we conceded a goal but we stopped trying to do the right things.

"I don't think anyone needs me to describe how good Philippe Coutinho is, you can see it. But Roberto Firmino? It should have been a close race.

"Sadio Mane played well, and Emre Can. It is not easy to pick this team. Gini Wijnaldum is in good form, Daniel Sturridge is always close to the team, Alberto [Moreno] is in good form and Simon Mignolet as well."