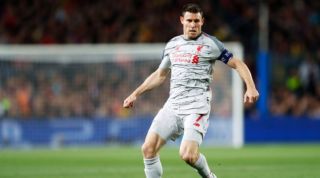 According to Le Parisien, the 33-year-old’s name has been discussed by the Ligue 1 club’s hierarchy as he enters the final year of his Anfield contract.

With Adrien Rabiot leaving at the end of the season and Leandro Paredes failing to impress since his January arrival from Zenit, the centre of the pitch will be PSG’s priority this summer.

Allan of Napoli is the club's number one target, while Manchester United’s Ander Herrera is also set to arrive on a free transfer at the end of his Old Trafford deal.

However, the outlet believes that coach Thomas Tuchel wouldn’t be against bringing in another midfield reinforcement and the England international’s name has come up in talks.

It promises to be a busy summer at the Parc des Princes after a disappointing campaign in which they were knocked out of the Champions League by Manchester United in the last 16.

Layvin Kurzawa, Julian Draxler, Thomas Meunier, Christopher Nkunku, Stanley Nsoki and Eric Choupo-Moting are among those on their way out of the French capital as PSG look to balance the books.