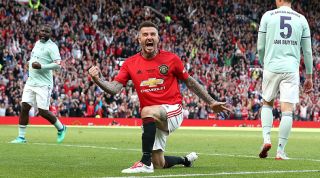 1. David Beckham can still ping them

He hit cross-field balls for fun, and took on Bayern's full-back in the lead-up to the first goal - a tap-in for Ole Gunnar Solskjaer, naturally. And he scored a beauty in the last minute, too.

Also: he looks alright, doesn’t he?

You would think that the years and friendly nature of this occasion may have calmed Scholes down a bit, but apparently not. He left the boot in on Martin Demichelis, slid in on a few other players, and looked very annoyed when he was caught in possesion early in the first half.

Taken off on the hour mark before he broke someone’s leg. A terror.

So few teams play 4-4-2 these days that you’d be forgiven for thinking it’s some footballing relic. Actually, it’s quite nice to watch.

One sitting midfielder, one coming forward, wingers bombing up and down, whipping in balls, strikers working in tandem trying to pull the defenders out of shape. More teams should play 4-4-2 next season.

Ze Roberto was signed by Bayern from Bayer Leverkusen at the same time as Michael Ballack, so you sort of forget about him as a result.

Turns out, even at 44, he is still very good (although in fairness, he only retired at Palmeiras in 2017). Playing in central midfield he was happily weaving in and out of the United midfield, and looked pretty sharp for most of the game.

United could do with another midfielder next season. Presumably there was a contract in the dressing room for him after the game.

5. Lingard and Rashford are off the leash

Nothing better exemplifies how football has changed over the years than Marcus Rashford and Jesse Lingard on punditry duty.

They looked amazing. The Football Hipsters are here to stay.