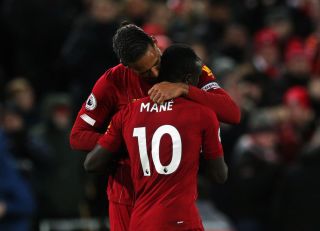 Record-equalling Liverpool moved to within four wins of a first title in 30 years but they were made to prove their credentials in a 3-2 win over struggling West Ham.

A 21st successive league victory at Anfield matched the Reds’ own top-flight record, set in 1972, while an 18th consecutive win drew them level with Manchester City’s Premier League landmark set in 2017.

Jurgen Klopp’s side – leading through Georginio Wijnaldum’s early header – found themselves 2-1 down after Issa Diop and Pablo Fornals threatened to pull off the shock of the season for the league’s 18th-placed team by ending the Reds’ 417-day unbeaten league run.

However, an embarrassing goalkeeping howler in front of the Kop from Lukasz Fabianski allowed Mohamed Salah to become the club’s joint-fourth highest Premier League goalscorer alongside Luis Suarez with 69.

Sadio Mane then ensured David Moyes endured another game without a win at Anfield, leaving the Hammers mired in a relegation battle after just two points from their last seven matches.

The former Everton, Manchester United and Sunderland manager has yet to taste victory in 16 visits to the ground but this was arguably the closest he has come.

Wijnaldum’s first goal for more than two months should have been the perfect platform to go on and take the game away from the visitors, who had scored just 10 away goals all season.

A rare foray forward for Naby Keita, replacing the injured Jordan Henderson, saw the ball break loose and, with West Ham seemingly happy to concede a corner, Trent Alexander-Arnold reacted quickly to whip in a cross which Wijnaldum headed past Fabianski.

Klopp’s side have been impressive from corners at both ends of the pitch this season, but they looked less-than-convincing defending the set-pieces and they did not help themselves by allowing West Ham six in the first half.

Just like against Atletico Madrid in the midweek Champions League defeat they conceded an early one, less than three minutes after Wijnaldum’s goal, with Diop forcing a near-post header past Alisson Becker.

The big defender’s third goal in his last six league matches meant he has accounted for 50 per cent of the Hammers’ goals in that spell, having scored just once in his 48 appearances before that.

It was the first goal Liverpool had conceded at Anfield in 11 hours and 27 minutes.

Moyes’ side were playing a more open game than expected, having barely been interested in getting over the halfway line at Manchester City last week, but that did not mean they were leaving themselves open with centre-forward Michail Antonio dropping back out of possession to play as a second left-back to counter Alexander-Arnold.

Still Liverpool had their chances with Fabianski tipping over a Salah shot and Virgil Van Dijk heading against the crossbar.

But the sluggishness seen in Madrid was still there: West Ham sensed their chance and took it with Fornals, an early second-half substitute for Tomas Soucek, tucking home Declan Rice’s cross having been afforded too much space by Van Dijk.

It was the first time Liverpool had been behind in the league since November 2 at Aston Villa.

Keita’s disappointing evening was ended by the arrival of Alex Oxlade-Chamberlain, who immediately injected the purpose and drive the Guinea international should have.

However, a helping hand from Fabianski, whose first involvement in the game saw his clearance rebound off Mane and roll past the post, allowed Salah to equalise when his shot slipped through the arms of the goalkeeper from Andy Robertson’s cut-back.

There was also a degree of fortune about Mane’s goal as Joe Gomez’s optimistic left-footed shot deflected into the path of Alexander-Arnold, who equalled last season’s league record of 12 assists for a defender by crossing for his team-mate to tap home.

The same combination had a goal ruled out for offside by VAR while substitute Jarrod Bowen had one more chance to deny Liverpool a share of the record but was foiled one-on-one by Alisson.