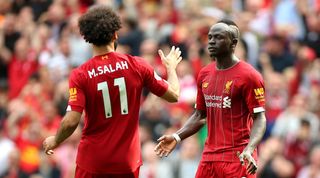 The Reds beat Tottenham in the Madrid showpiece to claim Europe's biggest prize for the sixth time in their history.

They also set a new club-record points total in the English top flight, although it was not enough to beat Manchester City to the title.

And Ancelotti, whose side welcome Liverpool to the Stadio San Paolo on Tuesday, believes Jurgen Klopp's side have become even stronger since lifting the Champions League trophy in June.

"We're playing the best team in Europe and they haven't dropped any points in the Premier League yet," the Italian said.

"The result is very important in matches like this, but it's even more important we have the confidence to match the best teams out there.

"Last year we were in a really tough group and we very nearly qualified. We're determined to erase the disappointment of last season, which had a psychological effect on us in Serie A too.

"Normally it's the European champions who are favourites, but we hope it ends the same way as last year's game at the San Paolo [Napoli won 1-0].

"Liverpool have improved because winning the Champions League gives you belief. Napoli have improved too and we've bolstered our squad with the addition of some quality players. I think it will be a great game - hard-fought and intense."