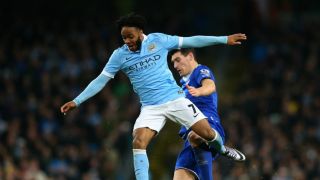 Manchester City’s Raheem Sterling insists he will not be distracted by the prospect of facing his former club Liverpool in the League Cup final.

The 21-year-old was the subject of a controversial move from Anfield to the Etihad Stadium last summer for a fee of £49million.

Following a slow start at his new club, Sterling has found the back of the net on nine occasions and is enjoying a consistent run of games under manager Manuel Pellegrini.

City overcame a two-goal first-leg deficit to advance past Everton in the semi-finals of the competition on Wednesday and Sterling is fully focused on claiming the first silverware of his career despite the upcoming reunion.

"I might get one or two [messages from Liverpool players] but it's strictly business at Wembley," Sterling told Sky Sports.

"It's why I came here, we're lucky enough to be in the final. It's really well done to Liverpool because they got to the final.

"We'll meet in the final and may the best team win on the day."

Sterling provided the assist for Kevin de Bruyne’s goal in the 3-1 home win but many Everton players and fans felt that the ball had gone out of play before he had cut it back.

"Listen I was only interested in the ball hitting the back of the net not if it went out,” Sterling said on the incident.

"We got the luck this time, last time [Everton faced City] we should have had a penalty, we scored and won the game at the end of the day."