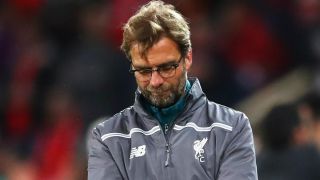 Liverpool manager Jurgen Klopp says the side are still suffering from their heartbreaking defeat to Sevilla in last season's Europa League final.

A first-half strike from Daniel Sturridge had Liverpool 1-0 up at the break in Basle, but a Kevin Gameiro goal and double from Sevilla captain Coke saw the Spanish side claim a 3-1 win.

The loss was Klopp's second in a cup final as Liverpool boss, having gone down to Manchester City in the League Cup decider in February.

But two months on from the events at St. Jakob-Park, Klopp hopes the suffering he and his players endured can spur them on in the new season.

"Of course I've had a lot of thoughts about this," Klopp said. "It was long ago but it still feels bad.

"After the game I was not in the mood to think too much about the first half but later I did and it was obvious that we'd played a good game in the first half and we could have been in a clearer lead.

"We could have had a penalty for handball, all this stuff that you see afterwards. It's not interesting because it's over but as a human being it's quite difficult to accept all this stuff.

"Of course you have moments when you still suffer a little bit."

Klopp said Gameiro's equaliser, which came just 18 seconds into the second half, effectively cost Liverpool the title, and a spot in the 2016-17 Champions League.

"In the second half, 18 seconds in was too soon," the German said. "I've thought a lot about half-time but there wasn't anything too special that I could highlight - that we were not too sure about the game or something like this.

"We knew it was only half-time and there was still a lot of work to be done but then what happened, happened.

"When you watch it again you see that something broke at that moment. Different players had no weapons any more. They had no power and no confidence.

"You saw that. We went too deep in a lot of positions and we were not close enough to the challenges.

"All of it was not too good but it was, of course, about the intensity that we had had on the way to the final. We'd had to over-perform one or two times, we had to play very special games and we'd had a lot of games.

"We'd tried everything to have fresh legs for the final, but none of this is an excuse because this was not a final that we should have lost but we lost and that's the truth."