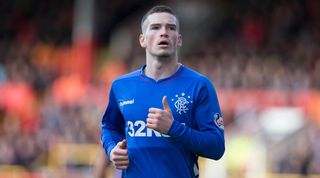 With his loan spell set to run out at the end of the season and chances of breaking into the Reds' first team looking minimal upon his return, Kent admitted he is looking at finding a permanent club.

“I want to kick-start my career somewhere now,” he said.

“I'm tired of changing clubs each year, I want to settle down somewhere.

“Liverpool have been good to me, but the enjoyment factor of going back there each year and doing well in pre-season and going back out on loan, it's a repetitive cycle.

“I was 19 when I went to Germany [at Freiburg]. I started off at Coventry in my first loan spell, my first experience of football in a men’s environment, then stepped up a division with Barnsley.

“I had a successful loan spell there and thoroughly enjoyed it under Paul Heckingbottom, who was a great help.

“I then decided to take it to the next level and go to Germany. That didn’t work out so I decided to go to Bristol City.

“Then Steven Gerrard provided this opportunity for me. I wouldn’t have got the opportunity to play in the Europa League anywhere else. In my eyes, the season has been a success.”

The winger has made 23 Scottish Premiership appearances at Ibrox this season and credited Gerrard and his staff for helping him develop further in Scotland.

“I think the way I've improved, the coaching staff and the manager have managed to find things in my game that other managers haven’t been able to get out of me. And that’s no discredit to other managers.

“I just want to finish the season as strongly as possible to help the team get as many wins as we can, and then obviously I’ll sit down with my representatives and a discussion will be had.

“I have three years left on my contract at Liverpool and there’s not much I can really do.

“Whether or not I get opportunities to go elsewhere during the summer, I’d want a club with ambition, a club that’s driven on getting silverware.

“I don’t want to join a team that’s just taking part – that’s not going to get the best out of me.”

QUIZ! Can you name all 52 Liverpool players to score in the Champions League?

LIST The 15 best free-kicks of all time: where does Messi rank?