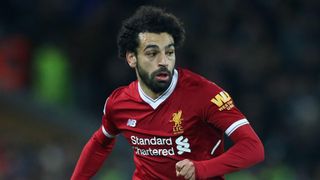 Jurgen Klopp expects Mohamed Salah to be fit to face Manchester City on Sunday but refused to discuss transfer rumours regarding Daniel Sturridge and Naby Keita.

Salah has missed the last two matches, 2-1 wins over Burnley and Everton in the Premier League  and FA Cup respectively, due to a groin injury.

But the Egypt international is back in training and set to be available when Pep Guardiola's runaway leaders arrive at Anfield this weekend.

"If nothing happens in this moment, Mo is back," Klopp told a news conference.

"He is training completely normal. That's very important for us."

Klopp: "If nothing happens in the moment, Mo is back [on Sunday]. He is training completely normal and that's very important for us." January 12, 2018

Of Liverpool's other injured players, Klopp said: "Hendo [captain Jordan Henderson] is out on the pitch and training, [but] not in team training so far.

"Alberto Moreno is back in team training yesterday, [the game against] City is too early but he should be back soon."

Sturridge is the subject of rumours linking the forward with a move away from Anfield this month, but Klopp was reluctant to provide updates about the situation of individual players.

"I have nothing to say about that! That's how it is," he said.

"We will see. Until 31 January a lot of things can happen. You will know before I will. Not only with Daniel."

Of the England international's recovery from a muscle problem, Klopp added: "He's back in training and on the way to being back [available] again."

Klopp also rejected suggestions Naby Keita's move from RB Leipzig to Liverpool, set to be completed at the end of the campaign, could be brought forward to help the team cope with the departure of Philippe Coutinho to Barcelona.

"My understanding is there is nothing to say," Klopp replied when asked about the Guinea international.

"I will not start [speculating] now. He is a player of Leipzig and will be in the summer here. That's all I know."

Klopp: “Virgil was quite impressive against Everton, you have to say that. But the City game is a completely different game. The team’s tactics should be as tuned as possible and I haven’t made a decision so far [on who starts].” January 12, 2018

Liverpool have already made a major outlay in the transfer market, signing Virgil van Dijk from Southampton for a reported fee of £75million.

The Netherlands international defender impressed and scored the winner on debut in the victory over local rivals Everton, but this weekend's meeting with the title favourites could prove too challenging for a player who is still getting to know his new team-mates.

"[The] City game is a completely different game," Klopp said.

"The team [thoughts], tactics, [need to be] as tuned as possible. I don't make a decision if he is ready for that.

"All the other three boys are in really good shape. In this moment, if nothing else happens, then I should sleep OK thinking about that [selection] problem.

"He's not guaranteed to start every game and that's not a problem."