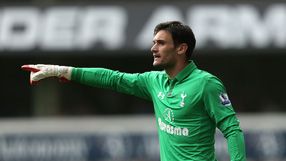 And Lloris, a late summer signing from Lyon, wants to ensure the No.1 shirt remains his own.

"I was used to playing in games every three days with Lyon," said the Frenchman. "And to progress, to be effective, it is better to play every week. Over the past month, I have played only three games.

"It takes a little more concentration, especially working at training. I try to compensate, but the truth is the game on the weekend [is most important].

"From the moment I signed for Tottenham, I have invested 200 percent. I show it every day in training with a lot of enthusiasm because all this is new to me and especially because it is the Premier League, certainly the best league in Europe.

"I am getting my bearings and I hope to play more and more, to be at my best. I still need a few games to find my rhythm."

Villas-Boas, however, has admitted that simply dropping 41-year-old Friedel is not in his immediate plans.

"After the Panathinaikos game [in the Europa League], we decided it would be logical if we wanted to get Hugo acquainted with the Premier League type of games," said the Portuguese.

"He can't play only Europa League. The change was not based on performance. Brad has been immense for this team."