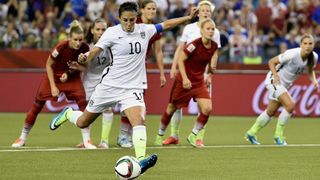 Carli Lloyd revealed that she shut out all outside factors prior to her penalty in United States' 2-0 semi-final win over Germany at the Women's World Cup.

The Americans progressed to the Vancouver final after their win in Montreal, with Lloyd's 69th-minute penalty added to late on by Kelley O'Hara's maiden international goal.

Fresh in Lloyd's mind would have been a miss nine minutes earlier from the spot by Germany's Celia Sasic, but the 32-year-old - in her 201st international - used all her experience to deal with the situation.

"I think I've been taking PKs [penalty kicks] after training for the last seven or eight months," Lloyd said.

"That felt like a good five minutes where I was waiting to take that PK.

"All I know was I put the ball down and I had to sink this PK."

Coach Jill Ellis lauded her side's effort at the other end of the park, with the Americans extending their clean-sheet streak to five matches - making it 513 minutes since they last conceded.

"It's a spectacular stat to be honest with you," Ellis said.

"We said as a team we need to get just one more than the opponent, if we keep a clean sheet.

"Not just our goalkeeper and our back four, I think that this team has embraced the accountability and responsibility of defending in every line.

"It's something we ask of them - but they deliver and they understand that it's important.

United States will meet the winner of Japan and England's semi-final - to be played on Wednesday - in the final on July 5.