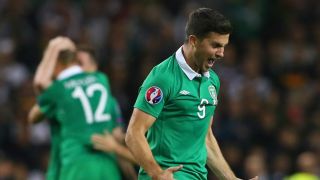 Shane Long is a doubt for the first leg of the Republic of Ireland's Euro 2016 play-off tie after suffering an ankle injury.

The Southampton striker, who scored the winning goal against Germany last week, picked up the problem while away on duty with Martin O'Neill's side.

Saints boss Ronald Koeman has since confirmed Long could be sidlined for up to four weeks, which may rule him out of first leg of the play-offs, scheduled for the week beginning November 9.

"The Shane injury is a disappointment. It's an ankle ligament injury and he will be out for two to four weeks," Koeman said on Thursday.

"That's a disappointment, but the rest of the players are happy to be back."

The Dutchman could welcome back Jordi Clasie for the meeting with Leicester City on Saturday after he returned to action in a friendly with Ajax last week.

"He's really back on his level and can be important from Saturday onwards," Koeman said.