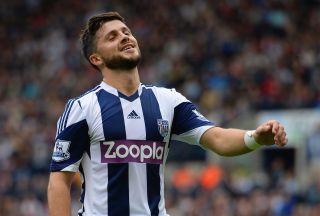 Long has nine months left on his deal at the Hawthorns with the option of an extra year, but talks over new terms have broken down.

The Republic of Ireland international has only started three games this season under Steve Clarke and has yet to find the back of the net in any of his five appearances.

The emergence of Saido Berahino along with the arrivals of Nicolas Anelka, Matej Vydra, Victor Anichebe and Scott Sinclair has increased competition for places, but Long insisted he wanted to stay and fight for his place.

"I don't want to go anywhere but time is running out on my contract and if an opportunity comes along that is right for me and my family, I will have to take a look at it," he told the Wolverhampton Express and Star.

"But as it stands I'm happy where I am, as a family we're happy where we are and I am enjoying life.

"I like playing for the manager and I am just concentrating on my football and hoping the rest takes care of itself."

Long arrived at West Brom in August 2011 and has scored 16 Premier League goals in 71 appearances for the club.