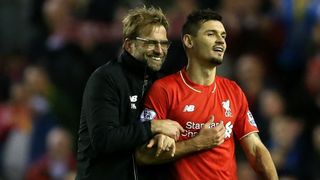 Liverpool spent £20million to lure Lovren from Southampton ahead of the 2014-15 season, but doubts over the Croatia international's ability to succeed on Merseyside were raised following a number of costly errors.

Lovren, however, has since turned his form around under the guidance of Klopp, who replaced Brendan Rodgers last year.

"What I touched last year was the bottom," Lovren told the Express. "I could not go any deeper.

"But I was never worried it would not happen for me here. I know my qualities. I like to keep fighting in the bad moments and I will never say I am done."

Lovren added: "There is Dejan Lovren, walking around, £20m, he's unhappy, he's s***. Ok, but I never love to judge someone's real worth too early.

"If, for two years, someone was always s*** then I would say go. You are out of here. But if you are a good player, you always will be.

"I will not say Jurgen gave me the confidence, but he gave me like the push: 'Heh, you are a good player and here is your chance. Take it'.

Lovren is set to play a big role against Manchester United on Thursday, as Liverpool - who hold a 2-0 lead - look to cement their spot in the quarter-finals of the Europa League.

Liverpool are also eighth in the Premier League, seven points adrift of fourth-placed Manchester City, who pipped Lovren and Co. to the League Cup trophy via a penalty shoot-out last month.

"Next season we will definitely have a better season. Jurgen needs his time to know the players. We need to get to know him and in the last couple of months we didn’t have much luck with injuries," Lovren continued.

"If we had all the players available – no problems. He reached a final of the Champions League, won the Bundesliga two times. It is not a small thing. He is a big name.

"I want to work with Jurgen. To see the pre-season with him. It will be something different."