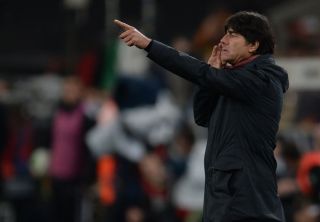 Low's men confirmed their place at next year's showpiece in Brazil on Friday with a comfortable 3-0 win over Republic of Ireland in Cologne.

Goals from Sami Khedira and Andre Schurrle as well as an injury-time Mesut Ozil strike qualified them as the winners of Group C with a game to spare, and afterwards Low revealed that initial discussions over a contract extension with the German Football Association (DFB) had already taken place.

"It is true we have had a first discussion (with the DFB) and talked about the general parameters and I think we can find an agreement."

Low took over the helm of Germany in 2006 after serving as assistant under Jurgen Klinsmann and has led them to the semi-finals of both the 2010 World Cup and Euro 2012, as well as a runners-up finish at Euro 2008.

His current contract runs until after the 2014 World Cup.