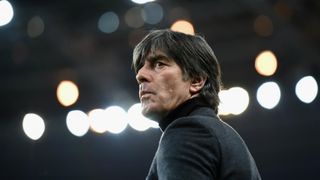 Germany coach Joachim Low was satisfied with his side's Euro 2016 draw, which he described as "doable" after being pitted against Poland, Ukraine and Northern Ireland.

The World Cup winners' clash with neighbours Poland on June 16 promises to be one of the highlights of the competition's group stage.

Germany get their campaign under way against Group C underdogs Northern Ireland and face Ukraine in their final group match.

"This group definitely is doable. We are the favourites, we want to finish top and that is our aim," Low told ZDF.

"I think we have to pay close attention to every opponent. We know Poland well from the qualification.

"Ukraine conceded the least goals of all the teams I think and Northern Ireland are very uncomfortable to play against."

Bayern Munich striker Robert Lewandowski will go up against many of his team-mates when Poland play Germany and the sides swapped wins against each other in qualifying.

When asked if Poland were the strongest team in Group C, Low replied: "I would not say that.

"We know their quality from the group, but the other two teams are dangerous as well."

Germany team manager Oliver Bierhoff was bullish, saying: "We sure were lucky. We wanted to avoid Italy badly but of course we have to take each opponent seriously. Northern Ireland are a personal favourite of mine as I scored my fastest hat-trick against them."