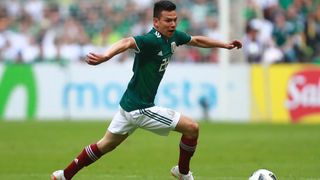 Hirving Lozano could be the breakout star of the World Cup, according to team-mate Erick Gutierrez.

Lozano, 22, enjoyed a fine season with Eredivisie giants PSV, but has previously been linked to Manchester United.

Gutierrez believes the attacker could shine in Russia, where Mexico face Germany, Sweden and South Korea in Group F.

"'Chucky' [Lozano] could be the revelation player of the tournament. He has grown a lot," he said on Thursday.

"We practically know each other since we were kids. I know about his capacity. He is very adventurous. He doesn't care who is in front of him.

"Hopefully he will have a great World Cup and will help Mexico to go far in the tournament."

Mexico begin their campaign with a clash against Germany in Moscow on Sunday.