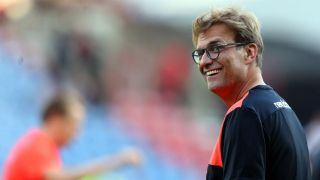 The Brazilian was withdrawn in the second half at the John Smith's Stadium with an apparent hamstring strain, having started a game in which Marko Grujic scored the opener and Alberto Moreno converted a late penalty.

Philippe Coutinho had earlier missed a spot-kick, but Liverpool have now won their first four friendlies, scoring 10 and conceding none.

Klopp's new signings were at the centre of all of his side's good work in the first half, with Sadio Mane having a goal disallowed and Loris Karius making a fine save, before Grujic opened the scoring with his second goal in as many games.

Just a few moments after the Serbian's fine finish, Mane ran through to win a penalty from Joel Coleman, but the Huddersfield goalkeeper remained on the pitch to deny Coutinho from the spot.

While there was a lack of goalmouth action in the second half, Liverpool suffered a blow when Lucas pulled up with an injury had to be replaced.

Bizarrely, with all outfield substitutes used, young goalkeeper Shamal George was required to come on up front.

There was still time for Moreno to add some late gloss to the scoreline, though.

He scored a penalty won by Ryan Kent, despite being jeered from his own supporters for taking the ball ahead of George.

Klopp's men now head to the United States for a series of International Champions Cup games, starting against Chelsea next Wednesday.