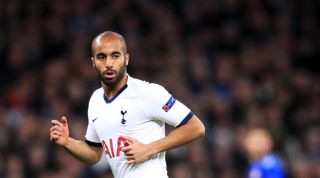 Tottenham forward Lucas Moura has opened up on his failed move to Manchester United seven years ago.

Lucas began his career with Sao Paulo in his native Brazil, before joining PSG for £38m in January 2013.

Inter and United were heavily linked with the attacker the previous summer, but both clubs ultimately lost the race to the Ligue 1 giants.

Lucas spent five years at PSG but was allowed to depart in 2018, when he joined Tottenham for £25m.

The Brazil international has now made 79 appearances for Spurs in all competitions, and scored his second Premier League goal of the Jose Mourinho era in Sunday's 2-1 victory over Wolves.

And Lucas has now revealed that he could have arrived in England's top flight much earlier than 2018.

"Yes, there was a conversation," Lucas told ESPN. "I was very close to signing with Manchester United. It was still at the time of [Alex] Ferguson.

"But I ended up choosing PSG, I spent five fantastic years there, I won a lot, learned a lot. I do not regret it. Despite the hard times, the bad times, I don't regret it because I grew a lot, I learned a lot. Now I'm here in the Premier League, and it's a new hope."

And Lucas also claimed that Mourinho, who took charge of Tottenham last month, had previously tried to sign him while he was at the helm of Real Madrid.

"He arrived, was more relaxed, he spoke of the time of Sao Paulo, which he talked to my parents when he was at Real Madrid.

"It was more relaxed. He always asks how I am. It's very cool, I always have this openness with him to talk. Even because of the language, it makes it a lot easier."

Spurs have won four of their five Premier League encounters under Mourinho, closing the gap between them and the top four to just three points.

And Tottenham will climb into the final Champions League qualification spot if they beat Chelsea on Sunday.

Even now, appointing Mikel Arteta as manager would be a major risk for Arsenal