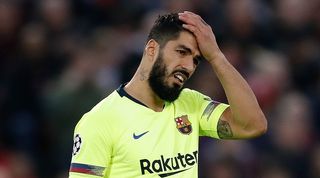 Former Chelsea defender Frank Lebouef has branded Luis Suarez a "cheater" after his antics in Barcelona's 4-0 defeat by Liverpool on Tuesday.

Ernesto Valverde's side held a 3-0 aggregate heading into the second leg of their Champions League semi-final, but a dismal display at Anfield sent them crashing out of the competition.

Ex-Liverpool striker Suarez was booed by the home crowd after he clashed with Fabinho and Andrew Robertson.

And Lebouef, talking to RMC Sport, has blasted the Uruguayan for his behaviour on Merseyside.

"I really like Barcelona, ​​but I was glad they didn't go to the final for Luis Suarez," the Frenchman said. "I have no respect for a footballer like him. He's a great footballer and he's having a great career, but he's a cheater, a complainer, a guy for whom I have no respect.

"I cannot stand a player like that on a football field. It's a bad example for young people. What he did with his hand against Ghana in the [2010] World Cup, he was very happy, both times he bit rivals [PSV's Otman Bakkal and Chelsea's Branislav Ivanovic].

"I'm surprised his rivals have cold blood in front of him. I think if I was still playing football, I wouldn’t finish the match [If I played against him] and I think that I’d be doing everything so that he wouldn't finish the match either."

Barcelona, who have already wrapped up the La Liga title, face Champions League-chasing Getafe on Sunday.