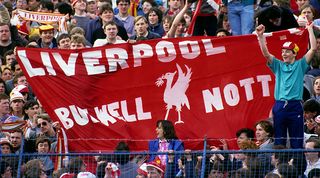 My name is Mark and I’m a turncoat. I have committed the cardinal sin of football supporting: I switched allegiances.

First, a few words in my defence. Unlike most perpetrators of this, the very worst of footballing faux pas, I can hardly be accused of glory hunting. Despite growing up in the south-west, it was a Liverpool-supporting household: my granddad had lived there for a while and, for reasons that remain sketchy, even had a silver shield engraved with the LFC liver bird dedicated to him from the club.

I was born in 1972, which means Liverpool’s glory years of European Cup wins coincided perfectly with my formative years.

But for an all too brief period, their European domination was threatened by the most unlikely of contenders: Nottingham Forest. The East Midlands side had rocketed into football’s stratosphere out of nowhere, fuelled by a charismatic manager with a chip on his shoulder bigger than his famous head.

There’s no doubt that I support Nottingham Forest because of Brian Clough. When my Derby-following friends point out that even Cloughie was a Rams fan, I’ll happily concede to them that I would have been too, had I been born a few years earlier when Clough was working his magic for them, not us.

Us. There’s that word again.

I have a distinct memory of the first time that Clough entered into my childhood consciousness. I was watching Match of the Day, sat on the floor in front of the sofa in our home in Exeter, when he was interviewed. Something about him captivated me. ‘Who’s that Dad?’ I remember asking. He laughed and then announced with a sense of drama, ‘That, son, is Brian Clough.’

The Battle for Old Big 'Ead: Did Brian Clough's heart belong to Derby or Forest?

At this point, I should add, I was still firmly in the Liverpool camp. And not, incidentally, in Exeter City’s: like most small towns, most kids in my school had two teams – the local one who you’d grudgingly support and occasionally watch live, and your First Division Team. Unsurprisingly, that was split fairly equally between Liverpool, Manchester United, Arsenal and Spurs – although Wolves and Luton had a disproportionate number of fans at Stoke Hill Infants, as I recall. My Dad insists that the first match I ever saw live was Exeter City vs Liverpool which, after a quick Google, I think must have been the 6-0 second-leg defeat in the 1981/82 League Cup (which ended 11-0 on aggregate. But, oddly, I don’t remember it.)

But at some point after Forest’s incredible back-to-back European Cup wins – i.e. when they’d already started their long, agonising descent towards ordinariness (the odd League Cup win notwithstanding) – and way before Liverpool’s decade-long dominance of the domestic game showed any sense of wilting, I inexplicably decided to swap sides.

The football fan in me likes to think it was an appreciation of the ‘we’ll-score-one-more-than-you’ / ‘football-on-the-grass-not-in-the-clouds’ / ‘do-what-you’re-good-at’ / ‘defence-into-attack’ philosophy that Cloughie installed. It might even have been partially inspired by the monotony of watching Liverpool grind their opposition into dust week after week.

For whatever reason, my head was turned by the end of the 1980s. I can’t honestly say when exactly I switched sides, but whenever it was, it was far too late for it to be acceptable.

Hillsborough looms large in this, for obvious reasons, and perhaps explains my muddled recollection. By that time – aged 17 – I must have changed my loyalty. But an odd, offset sense of guilt perhaps explains why witnessing the trauma inflicted on my family’s team – played out live over the tea-time results – left me with conflicted allegiances once again.

It didn’t help that Forest fans were at the other end of Hillsborough, not understanding what was going on; some of them initially starting awful, inappropriate chants – and my new hero Brian Clough still making despicable comments about it years later. (I should, for balance, note that I still watch Forest games today alongside friends who were in Sheffield that day and still bear the mental scars – just as I have Liverpool and Everton fans who will never recover from what happened to their friends.)

But it wouldn’t be fair to not acknowledge the other devastating, terrible event that affected Liverpool in the same era: Heysel.

I have another, distinct football TV-watching moment from my childhood. This time I was 13, and I recall being allowed to stay up late with my friends – this time in Taunton, Somerset, where we had moved to by then.

Sadly fights were commonplace at that time, and I have a guilty recollection of the laughter with which we met the opening scenes of the tragedy that was being played out in slow motion as we watched. At one point early on, a Belgian policeman hit the nearest person to him – a fan who had clearly run onto the edge of the pitch to escape the mayhem – and I know we all laughed at the blackly comedic injustice. We didn’t know what was to follow – possibly what had already occurred – but neither had most people.

By the time that the scale of the disaster had become apparent, we were all sick of it. We changed the channel. My friends went home and went to bed. The next day we didn’t talk about it. And – as complicated as this is for me to admit – that tallies much better with the timeline for when I decided to opt for the joy of the slightly mad, shackles-off embrace of pure football that Clough’s side still represented in that era.

The defining point for me without a doubt was watching Forest take on Liverpool at the City Ground several years later – one of those pre-seating days when the surge and expectation of the crowd would lift you off your feet and forward; a scary but thrilling experience that current generations will never experience.

During one of those moments – this time more a physical groundswell of fear as the Trent End recoiled and then breathed a collective sigh of relief – I remember seeing something I’d never witnessed before. It was the silence of awe as John Barnes bore down on the goal. When his chance ended in nothing, an old man piped up: “Come on lads, he’s not that good…” A lone voice behind me called back: “He f*cking is, you know!”

The experience was discombobulating (as another of our great managerial failures, Big Ron Atkinson, might say). Part of me reveled in the electricity I felt from watching one of England’s most elegant players at full pelt. But the overarching feeling was how much I wanted to believe that old man. A friend later pointed out that I’d referred to Forest as ‘we’ for the first time he could remember. Up until then he’d seen me as a football tourist, supporting the team where I lived (I had moved to Nottingham by now, my choice of university influenced by Old Big ‘Ead) – but with my loyalties elsewhere.

Not so long ago (in the scheme of things), we were in the play-offs. Not so unusual in my personal story of supporting Forest, but this time – May 18, 2007 – was another defining moment for me.

Forest, already 2-0 up from the away leg against Yeovil, only had to ensure they didn’t lose by three goals. They lost 5-2. In a perverse way, that night cemented my love for a team that I’d followed for 20 years by then. It was ridiculous.

What happened to Kerlon? The forgotten seal dribbler who entertained the world

At the break before extra time, I bumped into my friend’s dad – a lifelong Middlesbrough fan who never ceased in reminding me that he had grown up almost next door to Cloughie. “Hoops,” he said, “I’ve watched some shite in my life, believe me – but this...”

But at that point, I’d never felt prouder of the club I’d arbitrarily chosen to support two decades before. After the game, a friend pointed out that geographically I should support Yeovil, since they were the biggest team in Somerset, my home since I was a teenager.

I remember laughing at them. Why would I support a team like them?

FEATURE What happened to Kerlon? The forgotten seal dribbler who entertained the world

RANKED! The 51 best players in the Football League this season