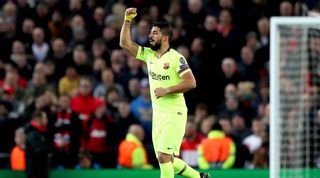 Juventus will test Barcelona's resolve by bidding for Luis Suarez if Neymar returns to his former club this summer, write Tuttosport.

Barcelona are desperate to re-sign the Brazil international before the European transfer window closes on September 2, although Real Madrid and Juventus themselves have also been linked.

However, the Serie A side are said to have a plan if they miss out on Neymar to Barcelona.

With the Catalan club hoping to add the PSG forward to an attack which already includes Lionel Messi, Antoine Griezmann, Ousmane Dembele and Suarez, Juve believe they could succeed in prising the Uruguayan away from the Camp Nou.

The former Liverpool striker has scored 177 goals in 248 games for Barcelona but turns 33 in January.

Meanwhile, Juventus are reportedly willing to offer Emre Can to the La Liga champions in exchange for fellow midfielder Ivan Rakitic.