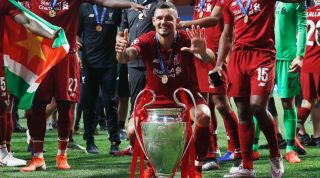 The Egyptian is expected to leave north London, with Galatasaray interested. The 27-year-old has been left out of Arsenal's 25-man Premier League squad, suggesting he is expected to depart, and his agent Alan Namzy has been in London to discuss his client's future at the Emirates.

Elneny made just 17 appearances in all competitions last season, with Unai Emery instead favouring Granit Xhaka, Lucas Torreira and Matteo Guendouzi in the defensive central midfield roles. A potential stumbling block for a move away could be the fact that he signed a contract extension until 2022 in March last year, meaning the Gunners will wish to recoup a healthy transfer fee.

Rojo is out of favour at Ole Trafford, and fell further down the pecking order following the arrival of Harry Maguire from Leicester City. The Argentine, who saw a deadline day move to Everton fail to materialise once again, is keen on a move away and Valencia are said to be interested in his services.

Signed by Louis van Gaal in 2014 from Sporting CP, Rojo has made just 112 appearances in a five-year spell at Old Trafford. He netted his first goal in a 3-0 FA Cup replay against Cambridge United back in 2015, but has largely struggled throughout his career in Manchester.

The Frenchman could re-join former club Monaco on loan, following a temporary spell in Italy with Milan – although the latest reports suggest PSG could also be keen. Having moved to Stamford Bridge for £40 million two years ago, Bakayoko is keen on regular playing time – and won't get it with the Blues.

Frank Lampard has Mason Mount, Ruben Loftus-Cheek, N'Golo Kante, Jorginho and Mateo Kovacic as his midfield options, meaning there's no place for the 24-year-old Bakayoko. A move to Ligue 1 is highly likely.

The 30-year-old hasn’t featured at all under Rodgers’ management, and the Northern Irishman has admitted that his experienced midfielder will likely leave before the European deadline. "I’ve had a long conversation with Adrien and I know where he’s at and what he’s thinking," said the Foxes chief. "He’s an experienced player, he’s 30 years of age and players like him want to be playing. The window is open for another few weeks so there may be something that comes up."

An odd one. The 22-year-old Venezuelan signed for the Hornets back in 2016, but only made his Watford debut against Woking in the FA Cup third round in January 2019 – a surprising lack of impact for a bright young player who helped his country to the final of the 2017 FIFA U20 World Cup, where la Vinotinto lost to England.

Peñaranda has been loaned out in the past three seasons and is expected to leave Javi Gracia’s squad to pursue his career elsewhere.

After a highly successful season on loan at Rangers in 2018/19, Kent looked to be in line for another move – but potential suitors Leeds opted for Arsenal striker Eddie Nketiah instead. Instead, the 22-year-old could head to the Bundesliga in search of regular game time.

Steven Gerrard is keen for Kent to return to Ibrox, but the Scottish giants can’t afford the £10 million transfer fee set by Liverpool. The winger is currently plying his trade in the Reds’ under-23 side, but wants a permanent move away from Merseyside.

Everton boss Marco Silva has confirmed that 60-cap Belgium international Mirallas is surplus to requirements at Goodison Park. Now 31, the winger – who spent last season on loan at Fiorentina and previously, former club Olympiacos – is on the search for his next club.

Everton are keen to remove some deadwood, with Mirallas’s team-mates Cuco Martina, Yannick Bolasie and Oumar Niasse also set to be offloaded.

Hacing made just seven appearances for the Saints in 2017/18, after his ill-advised arrival from Monaco in 2018, Carrillo spent last season on loan at La Liga side Leganes. He made 32 appearances there, scoring six times.

The 28-year-old Argentine is keen on a move back to La Liga to end his Premier League nightmare, and Leganes sporting director Txema Indias has hinted that the club would be keen to re-sign Carrillo permanently this summer.

Somehow, the 27-year-old is still on Newcastle's books. The Senegal international arrived on Tyneside for £5 million in January 2016, but after playing just four matches and starting twice in half a season with Newcastle, joined Saint-Étienne on a season-long loan. There followed moves to Turkey, with brief stints at Sivasspor and Bursapor.

He's not in Steve Bruce’s plans, and is expected to be shipped out.

Chelsea have reportedly slapped a £23 million price tag on the Italy international, with the Blues keen to move the defender on and recoup some cash before the European window closes. Zappacosta signed a four-year deal at Stamford Bridge after completing a €28 million move from Torino in the summer of 2017, but Lampard prefers Reece James as cover for Cesar Azpilicueta at right-back.

Zappacosta, 27, made 35 appearances for Chelsea during his first season, but his influence waned last year under Maurizio Sarri.

The Croatian was absent once again as Liverpool defeated Southampton 2-1 at the weekend, with a move to Roma having collapsed. Lovren has also been the subject of interest from Milan, and his future is still up in the air.

The 30-year-old, who joined the Reds from St Mary's in 2014, is fourth in the pecking order behind Virgil van Dijk, Joel Matip and Joe Gomez and will surely find a new suitor before it's too late. Napoli have joined the race for his signature, according to reports.