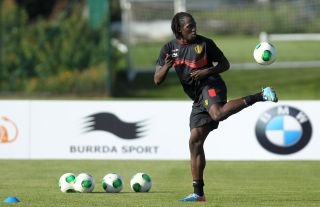 The 20-year-old had to watch from the stands as his new side beat his parent club 1-0 at Goodison Park last Saturday, and is now eager to make his impact on Merseyside.

This represents the Belgium international's second loan spell in as many seasons - with his time at West Brom last term seeing him impress with 17 goals in 35 Premier League games.

And he is hopeful of getting going at Everton against West Ham on Saturday.

"I was like, 'why am I not on the pitch at this moment?'. It was difficult watching, because every time someone had the ball I was like, 'I'd do this in that position' or, 'I'd do it that way'," Lukaku told the club's official website.

"Personally, I just want to help the team finish as high as possible in the league and hopefully arrive in a cup final if possible.

"I'm a striker, so if I keep it simple and score goals, that will be important. I'll work hard and if I do my best in training everyday then goals will come."