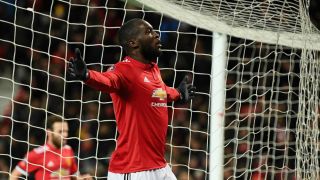 The striker suffered an ankle injury in the 2-1 Premier League win over Arsenal on April 29 and missed his side's final three league matches of the season.

Mourinho will wait until the "last moment" to decide whether the Belgium international is fit enough to face his former club, but he says Anthony Martial has recovered from the knock that kept him out of last week's 1-0 win over Watford at Old Trafford.

"Martial is fit and Lukaku we have to wait until the last moment," he told a news conference on Friday.

"I don't want to lie to you and say he doesn't play and then plays, so Lukaku, we have to wait."

Mourinho also confirmed Michael Carrick will not be in the squad for what would have been his final match as a United player before becoming a full-time coach.

The United boss has been happy with his team's preparation this week, though, with United having used Watford's training base in the build-up to the showdown in London.

"After the game it's goodbye, holiday for some and the dream and the motivation of the World Cup for others," he said. "So, to be here for three days is good.

"The weather is nice, the place is nice, thank you so much to Watford for letting us use their facilities for two training sessions.

"Everything is relaxed and calm and we enjoy to be together and, as I was saying, tomorrow, after the match, it's goodbye."