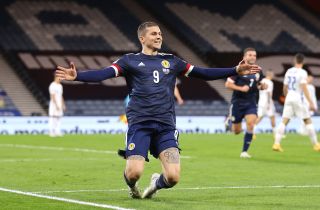 Lyndon Dykes scored his second goal in four internationals as Scotland maintained top spot in Nations League Group B2 with a 1-0 Hampden win over Slovakia.

Dykes converted Stephen O’Donnell’s cross in the 54th minute to stay one point ahead of the Czech Republic, who visit Hampden on Wednesday after beating Israel in Haifa.

The victory extended Scotland’s unbeaten run to seven matches and there were signs of growing confidence as an attacking force after an uneventful first half.

The 33-year-old replaced the injured Liam Cooper in the left of Scotland’s back three after being called up on Friday and produced a solid display with some notable second-half interventions.

Kenny McLean and John Fleck came into the centre of midfield and Ryan Fraser was brought in to support Dykes up front. Ryan Jack, Callum McGregor and Oli McBurnie dropped to the bench.

Like Scotland, Slovakia had reached a Euro 2020 play-off final on Thursday following a goalless 120 minutes, against the Republic of Ireland, and the visitors made nine changes with the experienced former Napoli playmaker Marek Hamsik one of the survivors.

Scotland forced some early corners and one put the visiting goalkeeper in trouble but a defender cleared after Dykes bundled the ball towards goal.

Scotland were struggling to play through the Slovaks or get many crosses in and McLean and Scott McTominay were well off target from long range.

The best chance of the first half fell to O’Donnell but it was far from easy. Fraser’s cross was headed out to the 18-yard line and the ball would not come down for the Motherwell player, whose shot with his weaker left foot bounced harmlessly wide.

Fraser hit a free-kick into the wall as Scotland started to move the ball forward a bit quicker. Dykes and John McGinn combined well on a couple of occasions without getting a shot away before Declan Gallagher glanced a header beyond the far post from Fraser’s corner.

Jan Gregus got the first shot on target inside a minute of the restart but it was a comfortable catch for David Marshall.

McGinn soon dragged a shot wide from 22 yards after a promising break, before the hosts took the lead.

Fraser played the ball inside for O’Donnell, whose cross was perfectly-weighted for the unmarked Dykes to slot home from six yards.

Slovakia suddenly found some attacking ambition and Marshall saved at the second attempt from Gregus after a corner.

However, Scotland were growing in confidence going forward and they came close to a second on several occasions.

Dykes set up Fraser for a clear sight of goal but the Newcastle wide player took a poor touch.

O’Donnell then presented Dykes with another good chance as the QPR striker peeled off to meet a cutback but could not get over the ball and his shot looped over.

McBurnie replaced Dykes and came so close to his first international goal when he headed Fraser’s cross against the bar.