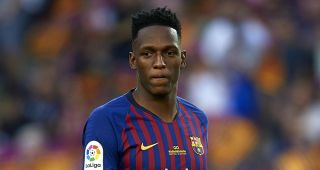 Lyon president Jean-Michel Aulas says Yerry Mina would prefer to play for his side over Everton, claiming the promise of Champions League football gives them the edge over the Barcelona defender's other suitors.

Mina had talks with Everton about a move to the Premier League but the 23-year-old said he would prefer to fight for his place at Camp Nou after only arriving from Palmeiras in January.

Aulas, however, is confident he can do a deal to bring the Colombia international to the Groupama Stadium.

Speaking ahead of his side's pre-season friendly with Huddersfield, Aulas discussed transfer targets and told reporters: "I have in my mind one example where we are in a battle with Everton.

"I don't think they play in the Champions League. There is indeed a gap in terms of revenue.

"If we think about the same player then he told me that he would prefer for us than playing for a club that doesn't play the Champions League."

Aulas said he was confident that his side's third-place finish in Ligue 1 last season, which earned them a place in Europe's premier club competition, stands them in good stead in the transfer market.

"I think that there are players who do not want to play for, let's say the team we play tomorrow, Huddersfield," he said.

"Even if they will be paid more, they would prefer to play for Lyon."