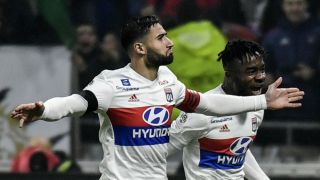 Nabil Fekir has refuted suggestions he is on the verge of joining Liverpool, with the Lyon forward insisting he will take time to plot his next move.

Fekir scored 18 goals and supplied eight assists in a superb 2017-18 Ligue 1 campaign as Bruno Genesio's side secured qualification for the Champions League.

It earned him a call-up to Didier Deschamps' France World Cup squad and the 24-year-old is aware he is a man in demand.

"I'm not close to Liverpool," Fekir told Telefoot, having been touted in some quarters as an attacker to fill the void left at Anfield by Philippe Coutinho's January departure to Barcelona.

"It's true that there are discussions with several clubs. I will take the time to think.

"It does not matter if I sign or not before the World Cup. As I said, I leave time to do things."

Lyon president Jean-Michel Aulas acknowledged interest in Fekir during an interview with L'Equipe this week, but insisted no formal offers have been made at this stage.

"He [Aulas] knows my desires, and we'll talk about all of this in the next few days," added Fekir.