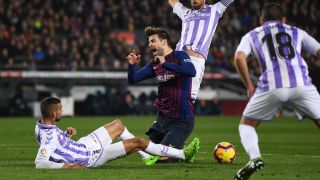 Gerard Pique has demanded improvement from Barcelona after they returned to winning ways in LaLiga with a fitful 1-0 triumph against Real Valladolid.

Draws against Valencia and Athletic Bilbao, either side of the first leg of their Copa del Rey semi-final against Real Madrid finishing 1-1, amounted to a wobble at the summit for Ernesto Valverde's champions.

A first-half penalty from Lionel Messi was enough to see off Valladolid, although ex-Barca goalkeeper Jordi Masip embellished an excellent display by keeping out a second spot-kick from the Argentine superstar five minutes from time.

It means Barcelona will return to Champions League action against Lyon with at least a six-point lead in LaLiga after 24 games, but Pique – who won the decisive penalty after marauding forward – does not believe Tuesday's European assignment will go to plan on current form.

"We didn't play well, it wasn't a good game," he told Movistar.

"The only good news is the victory, to get back to winning three points, but we have to improve.

"The sensations are not good and, for Tuesday, we have to be better. If not, it will go poorly."

Valverde rested Ivan Rakitic on the bench, while fellow midfielder Arthur is sidelined with a hamstring complaint, and Pique felt Barca were sluggish in possession as Arturo Vidal and La Masia graduate Carles Alena deputised.

"You have to find fluidity and play, that is what has brought us titles," he said.

"If we don't speed up the ball, we have possession...and we turn into a weak team.

"This is what we have to improve because our opponents know it."

Pique went to ground slightly theatrically when Valladolid captain Michel placed his arms on his shoulders, but the centre-back was in no doubt he deserved to be awarded a penalty.

"He knocked into my back, he unbalanced me and I fell. It's a penalty," he added.

"On television, they see things but the contact is enough for me to fall. For me, it's a penalty."