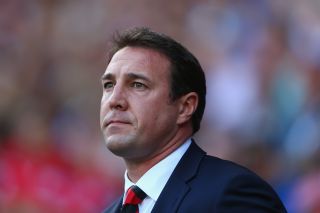 The Welsh club followed up their shock 3-2 victory over Manchester City with a dogged performance against Roberto Martinez's men, earning a deserved point for an impressive defensive display.

And Mackay believes that Cardiff were full value for a point against a side that he believes could have posed a significant threat.

"We played a top team here today, a team that finished sixth in the Premier League last year," he said. "That what I was reinforcing to my players before the game.

"There was no way we could make this after the Lord Mayor's show today and if we had at all come off our game we'd have been beaten and turned over today by a good team.

"Make no mistake we were at it, they were at it and it was two teams matching each other stride for stride. Shots on target I believe it was maybe 3-2 to us but it was very, very tight.

"It was a game of few chances but we were playing against very good players here today."

The Scot went on to praise his players' focus following a week in which they were widely lauded for an outstanding performance against Manchester City.

"I knew the team coming today were a very good team and I think people were still wanting to talk to us about Manchester City when we've actually got a game against a top team," he added.

"The other thing was that we kept a clean sheet today, which was absolutely deserved I felt.

"I looked at my back four and my goalkeeper especially - we defend from the front and our boys worked hard as a unit - but there were two or three exceptional performances in defence."

Mackay also dismissed suggestions that Everton were unfortunate not to be awarded a penalty when Leighton Baines appeared to be felled in the area by Gary Medel in the first half.

"I've not seen it on TV, I only looked at it live," he continued.

"When I looked at it live I felt it would have been incredibly soft had it been given. I felt there was very, very minimal contact and he was on his way down."