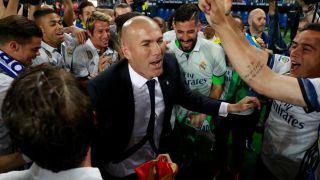 Fresh off claiming LaLiga for the first time as Madrid coach, Zidane's stocks are high in European football, having delivered the Champions League to the Spanish giants last season.

It has been a quick and seamless rise for the three-time FIFA World Player of the Year – who played for Madrid from 2001 to 2006 – after stepping into his first senior coaching role as a replacement for Rafael Benitez in January 2016.

Attempting to mastermind Madrid's successful Champions League title defence against Juventus on June 3 – no club has gone back-to-back in the prestigious club competition – Zidane is already being earmarked for the France job.

"I don't know when [current France boss Didier] Deschamps will decide, or when the federation will decide to get rid of him, but we all feel that Zidane will be the next national coach," Leboeuf told BBC World Service of Zidane, who won the 1998 World Cup and Euro 2000 with France.

"That is, if he wants to, because if he carries on being successful with Real Madrid then he won't take the job even if the seat is free.

"It's very hard to stay as Real Madrid coach for a long time, Mr Perez is very impatient. When it's possible, Zidane will join the national team, that's for sure."

Continuing to laud 44-year-old Zidane, Leboeuf added: "It seems that when Zinedine Zidane touches something, it becomes golden.

"When Real Madrid decided to name him as head coach, he came into the dressing room as the guy who won the World Cup and had worked hard for the club and won the Champions League with a fantastic volley in Glasgow [in 2002], so he had the respect of the dressing room.

"But I think his work alongside Ancelotti as an assistant, and then his work in charge of the reserve team, gave him enough experience to get into the job."