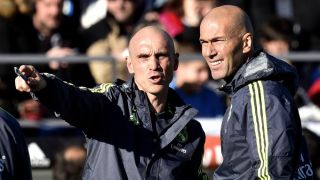 Bettoni has been helping his compatriot on the training pitch ever since he replaced Rafael Benitez at the helm, with a number of reports from Spain suggesting he has been named as Zidane's right-hand man.

However, Madrid have now moved to clarify his position and made it clear Zidane does not have a formal assistant.

"Real Madrid would like to inform that David Bettoni is not the assistant coach of the first team as stated in some reports published in the last few hours," said a statement on the club's website.

"As Zinedine Zidane said in the press conference when he was presented as first team coach on the 5th of January, he doesn't have an assistant coach.

"David Bettoni is part of the technical team that serves the first team and assist the head coach."