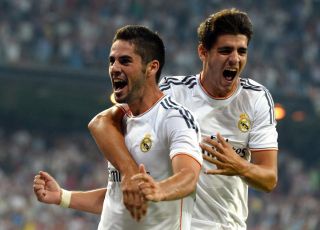 Vicente del Boque's men travel to Scandinavia in command of Group I of the European qualification section, leading France by one point following their 1-0 win at the Stade de France back in March.

The reigning world and European champions still have much work to do to qualify for Brazil 2014 though, and Del Bosque has named a strong squad as he aims to take all three points against third-placed Finland.

Isco was one of the stand-out performers in the Spain's success at the UEFA Under-21 Championship in June, and has also impressed for new club Real since his close-season switch from Malaga.

His club team-mate and national team captain Iker Casillas - who has yet to feature for Real this season - is likely to continue in goal, with team-mates Sergio Ramos and Alvaro Arbeloa included in Del Bosque's defence.

Centre-back Inigo Martinez is also included, the Real Sociedad man being rewarded for his prominent role in the Under-21 Championship victory.

A total of seven Barcelona players have been selected, with the likes of Xavi, Andres Iniesta and Cesc Fabregas all involved.

Atletico Madrid midfielder Koke will be looking to make his international debut in a game Del Bosque has admitted Spain need to win.

"The biggest concern that I have is Finland and the three points," the former Real Madrid manager said.

"We must not lose the enthusiasm for all that we have won and we can win."