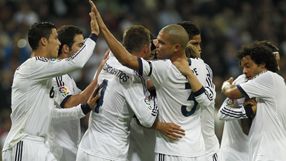 Jose Mourinho's side turned the corner in their opening Group D match at home to Manchester City two weeks ago when Ronaldo completed a thrilling comeback for a 3-2 win at the Bernabeu which lifted their early-season blues.

The Portugal international's comments that he was 'sad' at the beginning of last month coincided with a poor run of form and two league defeats, the same number they suffered during the whole of last season's championship-winning campaign

The City comeback, however, has helped to dispel the doubts.

Real followed it up with a 2-0 win at Rayo Vallecano and thrashed Deportivo La Coruna 5-1 at home on Sunday when Ronaldo netted a hat-trick to make it five goals from his last three outings.

"We have achieved three consecutive victories and this is the way forward," Real defender Sergio Ramos told reporters after the win over Deportivo.

"Now we need to enjoy this and think about Ajax and the Champions League. We are very keen to win this title."

Real have reached the Champions League semi-finals for the last two years and the club feel a tenth European title is within their grasp.

However, Ramos also indicated that the side had one eye firmly on next Sunday's 'clasico' at the home of league leaders Barcelona, whom they trail by eight points.

"There are a large number of points between us [and Barca] and the 'clasico' will be a chance to... cut the difference," the Spain international said.

"Ronaldo is in tremendous form. I hope it lasts and that we'll see him this way in our next league game."

Ajax are looking to young playmaker Christian Eriksen to help them improve on a four-match losing streak from the last two seasons against Madrid, when they failed to score a single goal while conceding 12.

"In matches like this, big players stand up and Eriksen has the potential to become such a player," Ajax coach Frank de Boer told reporters.

"That's why I criticise him, just to challenge him. I know he is only 20 years old but still his team-mates need his support. If it gets difficult he has to stand up and guide his team through it.

"Barcelona are the ultimate example. They keep passing and dominating as a team until they get the ball to [Lionel] Messi, who can do something with the ball no-one else can."

Without injured Serbian winger Miralem Sulejmani, De Boer is likely to start with the same team that lost their opener 1-0 at Borussia Dortmund.