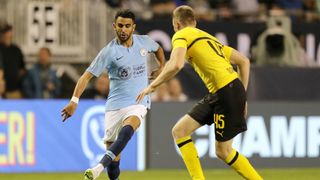 Leroy Sane is relishing the chance to link up with Riyad Mahrez after the Algeria international swapped Leicester City for Manchester City.

Mahrez had long been linked with a move to Etihad Stadium, with a January switch failing to materialise.

Pep Guardiola returned for the 27-year-old this month as the Premier League champions shelled out a reported £60million for the winger – a club record.

And Sane is delighted to have Mahrez lining up alongside him in 2018-19, having been frustrated by the 2016 PFA Player's Player of the Year in previous campaigns.

"I'm happy he's here," said when asked about his new team-mate. "Every time we played Leicester and he had the ball, I was like: 'Okay, please don't do anything creative!'

"I'm really happy that he's now with us as he's a really good football player. You can see it already.

And the 22-year-old believes the added competition for places will push City to new levels, while also allowing them to deal with the congested fixture list.

He added: "The pressure will be on everyone to do well. If one player plays a lot of games, he can now have a rest – perhaps two games to see if he can recover.

"When you look back at last season with Bernardo Silva – to have that competition makes you stronger and better.

"In the squad, we have good players, who can play in your position. That helps the team and that's the most important thing.

"We know the Premier League is very hard, playing a game every three days. If you play the whole season, then come the end it can be really hard."