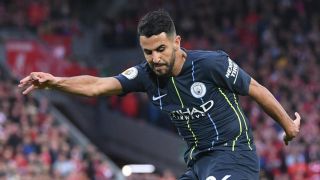 City moved top of the table on goal difference after Sunday's stalemate, but Mahrez passed up a golden opportunity to snatch all three points.

After Leroy Sane was fouled in the box by Virgil van Dijk in the closing stages, Mahrez won the right to take the spot-kick despite Gabriel Jesus' protests, with Sergio Aguero having been substituted.

But the former Leicester City winger blazed his effort over the crossbar, missing a penalty for the fifth time in the Premier League.

Mahrez, though, said he will move on even though City were unable to record a first Anfield win in the Premier League since 2003.

"My record is good in the Champions League yes, but not in the Premier League," Mahrez said.

"We have to go forward and stay strong – it's football, it's life.

"It won't affect me at all. Everyone misses penalties, even big, big players.

"Of course I wanted to score to help the team to win. I made the decision to shoot in the middle – the ball went up.

"But the most important part was that our performance was very good. We deserved to win, but sometimes it's important not to lose, as well."