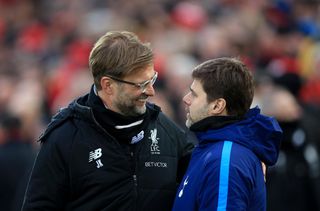 The Premier League continues this weekend after a number of its clubs enjoyed success in the Champions League and Europa League in midweek.

The pick of the games sees pacesetters Liverpool face a rejuvenated Tottenham side at Anfield on Sunday, by which time their lead could be down to three points if Manchester City can beat Aston Villa at the Etihad.

Here, the PA news agency look at some of the major talking points heading into another key round of fixtures.

Can Spurs build on their five-star display?

Spurs manager Mauricio Pochettino was under serious pressure before the 5-0 thrashing of Red Star Belgrade following a string of results which included a 7-2 humiliation at the hands of Bayern Munich, a 3-0 loss at Brighton and a fortunate 1-1 draw at home to bottom side Watford. However, the fact remains that Spurs have won just three of their first nine games in the Premier League and they face a tough task against Liverpool, who followed an insipid draw at Manchester United with their own impressive Champions League win away at Genk.

Will Watford claim their first win of the season?

Watford fans had every right to be aggrieved after only claiming a point against Spurs last weekend after outplaying the home side and being denied a clear penalty – despite the use of VAR – when Jan Vertonghen brought down Gerard Deulofeu. However, Quique Sanchez Flores and his players can take heart from that display and Saturday’s opponents Bournemouth could provide the ideal opposition after a winless three-game run culminated in last weekend’s woeful 0-0 draw at home to Norwich.

What argument will VAR spark this weekend?

PREVIEW | Sean Dyche gives his view on the use of VAR in the Premier League ahead of this weekend's fixture against Chelsea.— Burnley FC (@BurnleyOfficial) October 24, 2019

Former referee Keith Hackett told the PA news agency this week that there is “a level of arrogance” coming from Professional Game Match Officials Limited and labelled the application of VAR in the Premier League as “flawed”. Those strong words came after another host of controversial incidents, including the aforementioned Vertonghen foul on Deulofeu and Divock Origi looking to have been fouled in the build up to Marcus Rashford’s opener for Manchester United against Liverpool. It will be interesting to note if referees respond to growing pressure to utilise pitchside monitors to review their own decisions, rather than relying on colleagues at Stockley Park.

Can Villa spring a surprise at the Etihad?

A look at the form guide ahead of our next challenge. 📈#PL#AVFCpic.twitter.com/m8bA1TQuN4— Aston Villa (@AVFCOfficial) October 24, 2019

Many pundits will be taking a home win for granted when Manchester City take on Aston Villa in Saturday’s lunchtime kick-off, with Pep Guardiola’s side bouncing back from their shock defeat to Wolves with a 2-0 win at Crystal Palace and a 5-1 thrashing of Atalanta in the Champions League. However, Villa are unbeaten in their last four games in all competitions and beat Norwich 5-1 at Carrow Road in their last away game so Dean Smith’s team may not prove to be the pushover many are expecting.

Have Manchester United turned the corner?

After stopping the rot with an impressive display in the draw with table-topping rivals Liverpool, United ended an 11-match winless run on the road with Thursday’s Europa League victory at Partizan Belgrade. Next up is another away fixture against struggling Norwich and while beating the Canaries might not be the most difficult task, Ole Gunnar Solskjaer desperately needs to keep momentum on his side as he seeks to rebuild United’s shattered reputation and the confidence of his players.