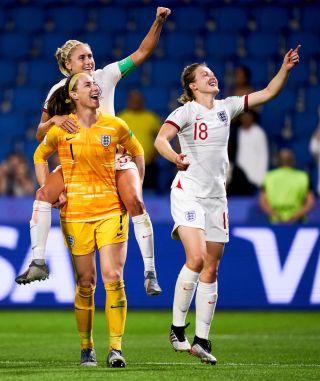 England take on the United States in the semi-finals of the Women’s World Cup on Tuesday. Here, PA looks at some talking points ahead of the game.

After finishing third in the 2015 tournament, the Lionesses are aiming to reach the final for the first time in their history. They should certainly now feel they belong on such a stage. Phil Neville’s side are ranked third in the world and have won all five of their matches in the tournament. They also arrived in France full of confidence after winning the prestigious invitational SheBelieves Cup.

Standing in England’s way are the United States, the undoubted top side in the world. The Americans are the holders, number one in the world rankings and unbeaten in their last 43 internationals. Their last loss at a World Cup came in the 2011 final against Japan – and even that was on penalties. They have won the World Cup a record three times and will be formidable opposition, but England can take heart from a 2-2 draw against them in the SheBelieves Cup.

Lucy Bronze has been outstanding for England throughout the tournament and was recently hailed by Neville as “the best player in the world”. The former Liverpool and Manchester City right-back will be on home turf having joined Lyon, with whom she has won two Champions League titles, in 2017. She capped England’s 3-0 win over Norway in the quarter-finals with a stunning strike from the edge of the box.

Off the field, a “spygate”-style row has added a little bit of spice to the build-up after a member of the American administrative staff was spotted in the England team hotel over the weekend. The United States have said this was nothing untoward, merely some advanced planning as the team look where they might stay next should they advance. Yet with Neville saying this was “not etiquette”, eyebrows were clearly raised.

The battle to be top scorer in the tournament provides an interesting side story. Two Americans, Megan Rapinoe and Alex Morgan, are currently tied with England’s Ellen White on five goals.