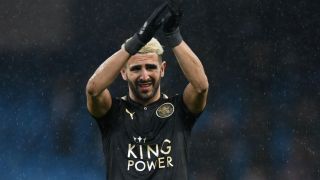 Riyad Mahrez made a mistake in his handling of a desired switch to Manchester City, says Leicester City manager Claude Puel.

The Algeria international was the subject of a deadline-day bid from the Premier League leaders, thought to be in the region of £60million plus a player.

Leicester rebuffed those advances, reportedly hoping for a fee closer to £90m, prompting City to pull out of the deal.

Mahrez missed the Foxes' 2-1 defeat at Everton and the 1-1 home draw with Swansea City and last week the winger released a statement denying rumours that he had gone on strike in protest against his blocked move.

He returned to the first-team squad and came off the bench as Leicester were thumped 5-1 at the Etihad Stadium on Saturday and, while expressing belief that Mahrez was in the wrong, Puel is eager to draw a line under the saga.

Thanks for your support on Saturday, fans. gallery  February 12, 2018

"I think since the beginning of the situation it was tough to manage, but all the time we kept united about this situation and about Riyad," Puel told the Leicester Mercury.

"That was the most important thing. Sometimes some players can make a mistake.

"It was the first time for him and it was a mistake but the most important thing is to look forward and put it right.

"He is fantastic player for us, his team-mates and the fans. It is a pleasure to watch him. It is important we continue together."