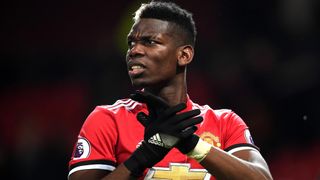 Pogba set up two goals as United eased past Stoke City 3-0 at Old Trafford in the Premier League on Monday.

Mourinho was full of praise for the midfielder and said United could become Pogba's team.

"He was moving the ball fantastically well, with long passes changing the direction and creating problems for the opponent," he said.

"He had an assist and if he had scored the free-kick with the last shot of the game, it would be really a reward for him.

Mourinho revealed Martial had scored a similar goal in training, but it was set up by the manager.

"He scored yesterday [Sunday] the same goal in training but instead of Paul's pass, it was my pass," he said.

"I was making the assists for the finishing. It was a great assist and the same shot."