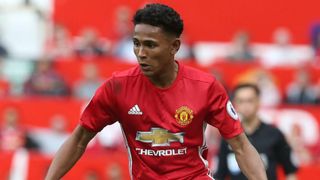 Three days before the Europa League final against Ajax, Mourinho named a team with an average age of 22 years and 284 days.

Mitchell and the scorer of United's first goal, Josh Harrop, were handed debuts from the start, while 16-year-old Angel Gomes came off the substitutes' bench to also make his United bow.

Paul Pogba added a second as United won 2-0 and a delighted Mitchell felt playing alongside so many other players from the youth set-up was "mad".

Mitchell told MUTV: "I just want to thank the manager and say congratulations to the other guys, Harrop, [Scott] McTominay, Angel, who is 16. It is just great experience.

"It is mad. I never thought that all of us could be on the pitch at the same time, so it is great.

"I'm just happy to play and want to thank the manager. It was a great experience stepping out at Old Trafford.

"It was massive for me. I was born near Old Trafford and now stepping out at Old Trafford – it is what dreams are made of."

Mitchell, who completed the full 90 minutes, revealed senior players Pogba, Phil Jones and Michael Carrick all helped the youngsters to calm their nerves before Sunday's match.

"You try and picture how you want the game to go but it is different out there," he said.

"Of course there were a few nerves but all the lads - Paul, Carrick and Jones - were great before and during the game.

"It was great to have them alongside to help me through the game and give me confidence."