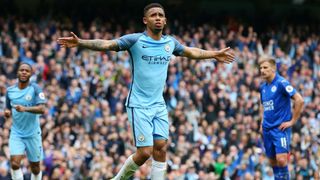 Manchester City took a step closer towards guaranteeing a top-four finish in the Premier League with a 2-1 win over Leicester City at Etihad Stadium, but were helped by a disallowed Riyad Mahrez penalty.

Goals from David Silva and Gabriel Jesus were enough for Pep Guardiola's side to make it back-to-back wins in the top flight, despite a fine strike from Shinji Okazaki for the visitors.

Mahrez saw his converted second-half spot kick ruled out for touching the ball twice as Leicester pushed for an equaliser, but Manchester City held firm for an important, if not wholly convincing, victory.

Leicester, who saw their title officially taken from them by Chelsea on Friday, won the reverse fixture in December 4-2 but found themselves behind in controversial fashion here.

Silva's second goal in as many games was allowed to stand despite uncertainty over whether Raheem Sterling had made contact with the ball from an offside position as it found the net.

Jesus' penalty doubled the lead before Okazaki halved the deficit shortly before the break, and although Mahrez thought he had levelled the scores in the final 15 minutes, his penalty was disallowed after he touched the ball twice.

The victory moves Manchester City onto 72 points and above Liverpool into third in the table, with a six-point cushion between them and fifth-place Arsenal ahead of their trip to Stoke City.

There was something of a sparse crowd at the Etihad for the early kick-off but the home fans should have had a goal to celebrate in only the third minute, with Fernandinho heading wide from six yards after meeting Leroy Sane's corner totally unchallenged.

Wilfred Ndidi missed a similarly clear opening for Leicester, making a mess of a clear header from point-blank range, before Sane scuffed a shot wide after a spell of mounting pressure from Pep Guardiola's men.

The home side's dominance proved telling on 29 minutes as they broke the deadlock, albeit in controversial fashion. Silva's scuffed shot from a low Sane cross bounced into the bottom-right corner, but only after Raheem Sterling had taken a swing at the ball to help it on its way while standing in an offside position.

Referee Bobby Madley allowed the goal to stand despite the Leicester protests, but the visitors could have no complaints about Manchester City's second seven minutes later. Yohan Benalouane flattened Sane with a careless challenge six yards from goal, allowing Jesus to step up and sweep the ball confidently into the corner of the net from the spot.

Leicester responded quickly to that set-back, however, with Okazaki arrowing a fine left-foot volley into the roof of the net from 12 yards following Marc Albrighton's cross from the left, ensuring that the visitors had a lifeline heading into half-time.

23 - Shinji Okazaki has ended a run of 23 games in all competitions without scoring for Leicester. Rocket.May 13, 2017

They could have drawn level four minutes after the restart after Jamie Vardy raced down the right and pulled the ball back for Albrighton, but the winger's volley was poor and made for a comfortable save for Willy Caballero.

Albrighton was then involved in another moment of controversy, with the former Aston Villa man left with a heavily swollen right cheek after being caught, seemingly accidentally, by a raised elbow from Fernandinho – an incident that went unpunished.

City were struggling to make any inroads in the Leicester half, allowing Craig Shakespeare's side to grow in confidence in their pursuit of a leveller, and they were given a golden opportunity when Mahrez skipped beyond Gael Clichy and was felled just inside the box by the full-back's outstretched leg.

However, the Algerian slipped when taking the penalty and kicked the ball off his standing foot and into the top corner, prompting Madley to correctly award a free-kick to City and disallow the goal, allowing Guardiola to breathe a sigh of relief.