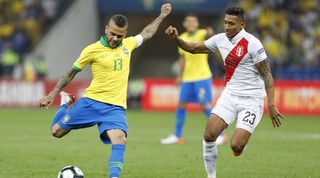 Alves is a free agent after his PSG contract expired at the end of the 2018/19 season, and he has been linked with a move to City in the past.

The Brazilian appeared set for a move to the Premier League side two years ago when he left Juventus, only to have a late change of heart and head to France instead.

However, City are still interested in signing the right-back, according to the Daily Mail.

As things stand a deal appears unlikely, as Alves’s compatriot Danilo will need to find a new club to free up a squad space.

Juventus and Inter Milan have both been linked with the former Real Madrid defender but a move is yet to materialise.

Alves captained Brazil to Copa America glory on home soil this summer at the age of 36, starting every game for Tite’s side and scoring against eventual finalists Peru in the group stage.