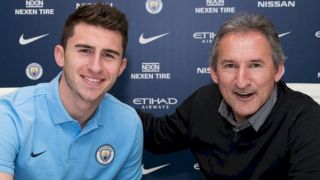 A deal for the uncapped Frenchman has been mooted since Pep Guardiola's arrival in 2016 and was finally completed on Tuesday, with the 23-year-old signing a contract until 2023.

Laporte, who made 222 appearances for Athletic, will wear the number 14 shirt at City.

"I am very happy to be here," he said. "City are a club with a lot of ambition and they are one of the best teams in Europe."

Although City are 12 points clear at the top of the Premier League and through to the EFL Cup final, Guardiola's men have been vulnerable at the back of late.

A clean sheet at Cardiff City in the FA Cup fourth round on Sunday was their first shutout in seven matches across all competitions, with Vincent Kompany again struggling for fitness this term and left-back options Benjamin Mendy and Fabian Delph both out.

With City unable to rely on captain Kompany and Guardiola lacking trust in Eliaquim Mangala, the runaway Premier League leaders have moved to bring in Laporte to boost their defensive options.

"We are delighted to have signed Aymeric," added Txiki Begiristain, City's director of football. "We have assessed defensive options and he is a player we have admired for a long time.

"With his quality and ability to play out from the back, we feel Aymeric will fit in perfectly with Pep Guardiola's playing style."

Laporte, who has spent his entire career at Athletic, reportedly opted against joining City in 2016 as he was recovering from a broken ankle.

He missed Athletic's last LaLiga match against Eibar, although coach Jose Angel Ziganda had indicated he was ready to select the player.

City's previous transfer record was the reported £55m paid to sign Kevin De Bruyne from Wolfsburg in 2015, with Guardiola having insisted the club cannot pay "£100m on one player, or £90m or £80m" following Alexis Sanchez's switch to Manchester United and Virgil van Dijk joining Liverpool.